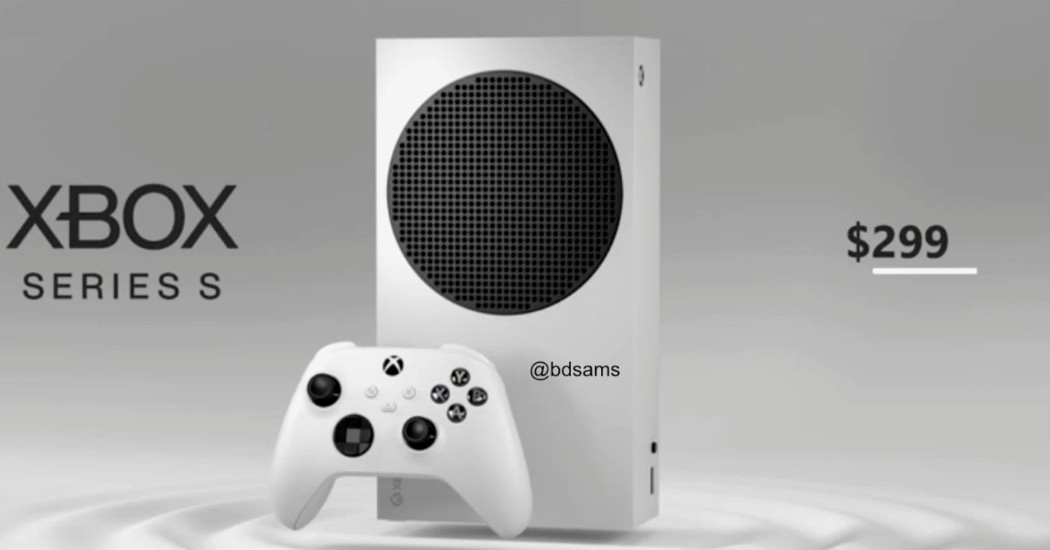 This could be our first look at the Xbox Series S, Microsoft’s cut-down next-gen console that carries the codename Lockhart. An image posted by Thurrott allegedly shows the console’s design and reveals a price point of $299. It’s not immediately clear where the image came from, but leaker WalkingCat followed up with a short video showing off the same design in relation to the Series X. Analyst Daniel Ahmad also corroborated the image, though couldn’t confirm the price.

If they’re legitimate, the leaks show a white console that looks somewhat similar to the Xbox One S, as the Series X does to the One X. It’s depicted in vertical orientation, though the rotation of the Xbox logo suggests that may not be the primary configuration.

WalkingCat’s video shows that the Series S is much thinner than the Series X, which should make it easier to fit under many TVs. The system appears not to have a disc drive, as The Verge has previously reported. There’s a circular vent up top, like the One S, but here it’s colored black to stand out more.

Windows Central reports that the Series S will indeed carry a $299 retail price but will also be available as part of a $25 per month Xbox All Access plan that’ll include Xbox Live and Game Pass. The Series X, meanwhile, is said to be $499 at retail or $35 a month.

Microsoft’s two-console strategy has long felt inevitable, between Xbox chief Phil Spencer’s comments on “the next Xbox consoles” and the Series X name’s implication of another series. The Series S name has already shown up in leaked controller packaging.

The Verge has reported that the Series S will target around 4 teraflops of GPU performance, compared to 12 in the Series X and 6 in the One X. Despite that comparison, though, this should be a far more capable machine than the One X. The Series S will benefit from the Series X’s hugely increased CPU power and SSD performance, meaning it’ll run true next-generation games, but the reduction in GPU power means it likely won’t output modern titles in 4K resolution. While the Xbox One X can run some Xbox One games in 4K, it won’t be able to play next-gen versions of games at all.

To clarify a couple of points from the first tweet, since people keep asking me.

1. Yes, this is the real console design and the console exists.

If the $299 price is accurate, that could make the Series S an affordable, attractive way to get on board with the next generation for anyone who doesn’t consider 4K a must-have. That makes sense for Microsoft, whose focus is on pushing Xbox Game Pass subscriptions to as wide an audience as possible — which also explains the lack of disc drive.