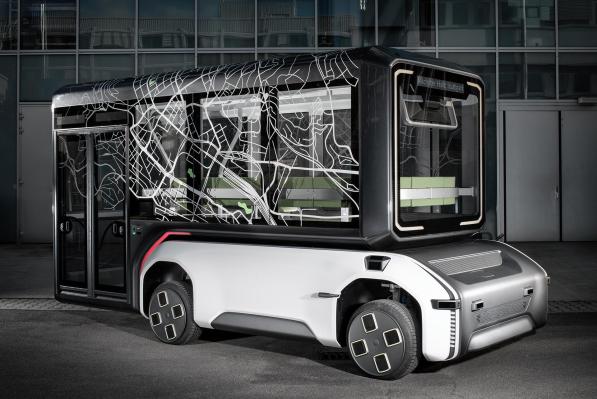 The German Aerospace Center (DLR) has debuted a prototype of what it calls ‘U-Shift,’ an urban mobility vehicle designed for multiple uses. U-Shift is a fully electric vehicle, designed for autonomous operation, and could serve in a number of capacities including as an on-demand shuttle, a bus, a mobile distribution center for package delivery, or even as travelling salesroom.

As you can see from the images, the base of the U-Shift itself is pretty simple, containing the wheels, drive system and batteries. DLR envisions a modular top component that can be swapped out depending on usage needs, with various add-on units depicted, including an airy, all-glass bus, and a more barebones cargo capsule.

This modularity could help the U-Shift better address the varied needs of city-based transportation, with the flexibility to shift modes relatively easily depending on what’s going on at the time. You could easily see how a fleet like this could be repurposed for on-demand package and grocery delivery during lockdowns like the ones that have been required during the COVID-19 pandemic, when personal transportation is less needed.

This prototype is functional, but it’s not autonomous – it’s remote-controlled instead. The top speed also isn’t that high, but it is capable of operating continuously for 24 hours when necessary. The primary purpose of this prototype is to test the system that swaps out the cargo/passenger capsules in order to chart a path towards production with companies who will be supplying those, and to study its user interface, including things like how the doors open and how accessible it is.

DLR plans to use all the information it gathers from testing of this prototype to help develop a second, fully automated version that can reach speeds of up to 60 km/h (just under 40 mph) by 2024. That next prototype should be much closer to any potential production version, and there will be more focus then on business opportunities and commercialization as well.