The 10,000 Pixel Per Inch Display is Now Possible 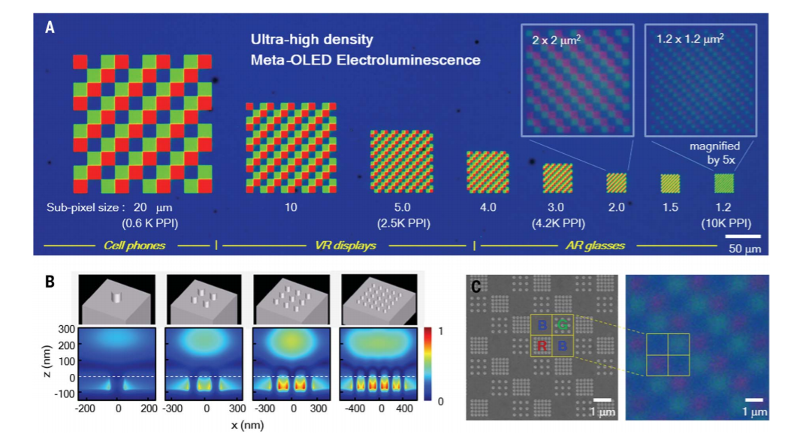 A good smartphone now will have about 500 pixels per inch (PPI) on its screen. Even the best phones we could find clock in at just over 800 PPI. But Stanford researchers have a way to make displays with more than 10,000 pixels per inch using technology borrowed from solar panel research.

Of course, that might be overkill on a six-inch phone screen, but for larger displays and close up displays like those used for virtual reality, it could be a game-changer. Your brain is good at editing it out, but in a typical VR headset, you can easily see the pixels from the display even at the highest PPI resolutions available. Worse, you can see the gaps between pixels which give a screen door-like effect. But with a density of 10,000 PPI it would be very difficult to see individual pixels, assuming you can drive that many dots.

Working with Samsung, the team added an extra layer to the bottom of a conventional OLED screen. The new layer — an optical metasurface — has very tiny corrugated mirrors that reflect white light into red, green, and blue components allowing the high density of pixels. A normal OLED panel uses white OLEDs also, but uses a filter to create the different pixel colors.

If you read the Standford paper, you’ll learn about Fabry-Pérot cavities and the Purcell effect. We are sure if you spend all day thinking about OLED displays, this is stuff that makes sense to you, but we had to look up quite a few things on Wikipedia.

While this is not in production, the team did create a proof-of-concept device not only had dense pixel packing, but also high color purity and twice the efficiency of a conventional display. Samsung is investigating scaling the technique to production.

We know you can make OLEDs at home, but probably not at that density. Of course, for serious organic lighting, why not consider a pickle?